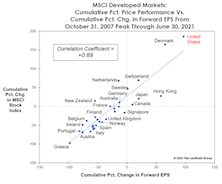 After the last two months’ violent reversal of the “re-opening” trade, the major indexes for U.S. Large Cap, Small Cap, Growth, and Value all stood with YTD gains in the 14-16% range. Yes, a few nimble portfolio managers might have migrated out of “re-opening” stocks in early April and into the “old” Large Cap Growth leadership but the surest route to superior performance has been to avoid what’s become an almost annual pitfall since the Great Financial Crisis: Foreign stocks. EAFE and MSCI Emerging Markets already trail the S&P 500’s 16.0% YTD gain by about 8% and 12%, respectively. 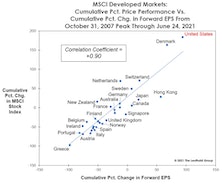 It’s near the year’s mid-point and U.S. equities are doing what they’ve done nearly every year since the onset of the Great Financial Crisis: trouncing their foreign counterparts. The S&P 500’s YTD gain of 13.5% is about 500 basis points better than EAFE’s, and 800 basis points above that of the MSCI Emerging Markets Index.

Our earnings waterfall analysis for the fourth quarter tells a story consistent with the entirety of 2018: earnings growth was fantastic, boosted by the twin drivers of strong sales growth and a lower corporate tax rate. Chart 1 spotlights the quarter’s tally, which produced a healthy sales growth number despite some economic weakening.

Once In A Lifetime?

To paraphrase a talking head and the Talking Heads, someday you might find yourself in a beautiful deleveraging, with beautiful valuations, and you may ask yourself, well, how did I get here?

Currently, the collective intelligence of Wall Street is predicting 6% S&P 500 EPS growth in 2019. It’s also the 61-year average annual growth rate for the index, so how wrong could it be?

The S&P 500 reported blockbuster earnings growth again in the second quarter of 2018. With the corporate tax cut boosting profits this year, we were curious to know how much of the improvement was tax driven and how much was due to the exceptionally strong economy.

The 2017 run that pushed the nine-year bull market to all-time highs made it very difficult to find anything that looked cheap, and few choices that looked average. Even the Tech bubble of 1999 allowed investors to find moderately priced stocks among the mundane old-economy companies...

Within EM, more robust growth is being exhibited by: 1) firms in Emerging Europe; 2) companies in Energy, Materials, and Financials; and, 3) larger cap companies. 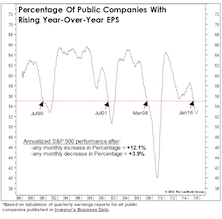 Scott Opsal’s “Chart of the Week” in mid-October suggested the seven-quarter S&P 500 earnings recession may have run its course. 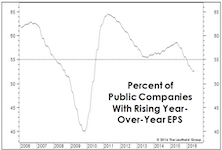 While we don’t see a U.S. recession on a one-year horizon, there are a handful of indicators that may force us to revisit that view—including the two relatively obscure data series shown below.

Searching For Growth In Emerging Markets

Even though the ten EM sectors are growing at a much stronger pace than corresponding U.S. sectors on the Top-Line, only a small margin exceed the U.S. in terms of EPS growth.

Sector Characteristics of the S&P Indicies

Important characteristics of the broad sectors of the S&P 500 along with the S&P Mid Cap and Small Cap indices.

So far so good, as sales and earnings numbers reported have been better than expected. Eric Weigel explores newly emerging trends from a number of angles and makes some cautious inferences.

A look at how the market reveals its preference for the top-line growth (revenue growth) vs. the bottom-line growth (EPS growth).

Identifying and comparing important characteristics of the broad sectors of the S&P 500.

Energy sector earnings growth has helped keep overall S&P earnings advancing at a relatively strong rate. Growth would be about 9% to 10% below reported growth if Energy stocks were excluded.

Assessing The Cycle….Putting Today’s Growth Into A Historical Context 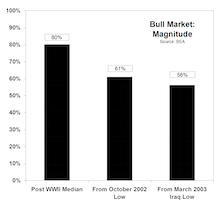 Within the current cycle, the stock market recovery is mature, but based on the average post WWII recovery could still have some upside (S&P 500 to 1400?). Currently, earnings growth is well beyond historical averages, but the economic expansion is below the norm.

The near term is becoming more uncertain for Health Care stocks, as HC groups have experienced an erosion in GS Score strength.

Earnings By Sector - Looking For EPS Growth In 2004

ComparIng earnings growth and estimates from Q1 2004 to those at the end of 2003.

Earnings By Sector - Looking For EPS Growth In 2004