Does An Economic Rebound “Inoculate” The Stock Market? 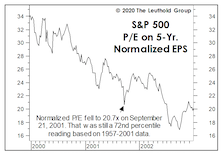 The 2020 decline exhibits a strong resemblance to the “incomplete” bear market of March 2000-September 2001—in that neither decline sufficiently deflated the extreme valuations of the preceding bull, and each was followed by an immediate rebound in reliable valuation measures to top decile levels.

The Tab For “Freebies” Keeps Escalating 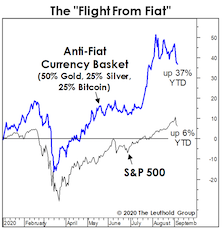 There’s an underlying faith that bureaucrats at the Fed and Treasury will keep good and bad businesses, alike, afloat—and overvalued. We’re still trying to unearth a single historical analog that merits such confidence.

Musings On A Manic Market 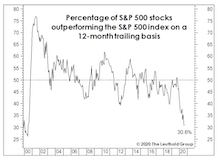 Officially, those quick to pronounce the move off March lows as a new bull market have been proven correct with new S&P 500 all-time highs. Fundamentally, though, there’s enormous risk in Large Cap valuations, regardless of where one believes we are in the economic cycle.

A “Litmus Group” For The Bulls 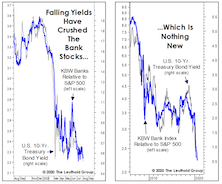 As troubled sectors vary from downturn to downturn, commercial banks have shown an uncanny ability to leap in front of each cycle’s proverbial pie truck. This time, it’s hard to identify the precise epicenter—especially amidst all the bailouts. 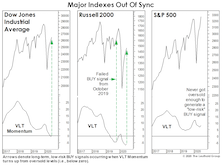 So what do we make of July’s “low-risk” VLT BUY signal on the DJIA—the index on which the indicator’s creator (Sedge Coppock) did his original work? Sadly, not much.

Implications Of The “Breakout” 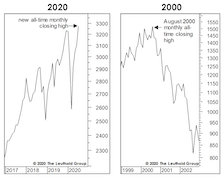 July’s developments led to us investigate the market valuations accompanying all past month-end S&P 500 breakouts which (1) eclipsed the prior month-end bull market high; and (2) made a new all-time high in the process.

The strong market rebound in the second quarter lifted the relative return of Growth vs. Value to an all-time high by the end of June. Chart 1 reveals that the cumulative S&P 500 Growth / Value return spread hit a new record last month, surpassing the previous high reached at the end of the Tech bubble in June 2000.

The Wrong Kind Of “Head Start” 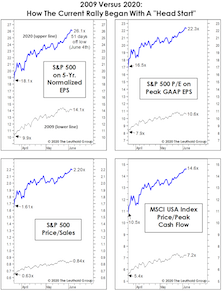 The rally’s initial resemblance to the first up-leg off the secular 2009 market bottom is remarkable. Both rallies started in March, and achieved gains of almost 40% within 50 trading days. Both, of course, sprung from a backdrop of unprecedented monetary stimulus.

The average “super-overbought” MBI reading occurred 54 days after a market low; June 4th marks the 51st trading day since the March 23rd low. Thus, any signal in the days ahead would arrive essentially “on time,” but the slippage (the S&P 500 gain already realized) would be enormous at around 40%!

Asset allocation decisions are fairly straightforward for groups of profitable and growing companies that fit nicely into a discounted cash flow model, but it is more difficult to describe the valuation of groups that include unprofitable companies.

Can The Rally Recover From Its 0-For-8 Start?

The current rally is either the first upleg of a new bull market, or the second-largest bear market rally in the last 125 years. The lone development that can settle the issue is for the S&P 500 to move above its February 19th closing high of 3,386.15.

Calculate The Next Low... With The Last Peak?

How does one value a stock market in which 12-month forward EPS estimates show their widest dispersion in history? A good start might be with methods we use when forward estimates show practically no dispersion (like three months ago). In either case, we place little weight on such estimates; each revision usually has only marginal impact on our 5-Year Normalized EPS.

There’s More To It Than That

It’s a down year for stocks, yet John Bogle must still be chuckling. A full-employment economy that had propped up one of the two most overvalued stock markets in U.S. history just suffered a cataclysmic “sudden stop.” Yet Bogle’s buy-and-hold disciplines have so far dodged the bear.

For those who must remain fully invested, an interesting (if not sickening) feature of the bear market is that those who entered it loaded with the most expensive and “trendiest” stocks and sectors have lost the least.

A composite measure of Mid Caps and Small Caps are at bottom-decile valuations relative to their 26-year histories. From a shorter-term viewpoint, though, we find it scary that valuations are so low just a single month into the recession.

A Bear Market In Price, But Not Time 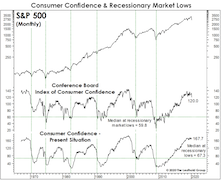 We have a hard time accepting that the excesses associated with an eleven-year bull market and expansion can be fully expunged in 27 trading days, no matter how ugly those days were… keep some powder dry!

While the bull didn’t live to see his 11th birthday, this month did mark the anniversary of another historic event: Twenty years ago this week saw the peak bubble-era close in the S&P 500 of 1,527.46.

As deep as the losses in the DJIA and S&P 500 have been, most professional investors recognize that those averages have masked the extent of the damage suffered by most stocks.

The recent market turmoil has only served to exacerbate equity style trends that have been in place for years, with Value, Small Caps, and High Beta all underperforming relative to Growth / Momentum, Large Cap, and Low Volatility, respectively.

With the markets in freefall, we’ve seen a dramatic spike in interest in our monthly “Estimating the Downside” vignette. We think a mid-month snapshot is in order to give some idea as to how much meat has been taken off the valuation bone.

A Developing Opportunity In The “SMIDs?” 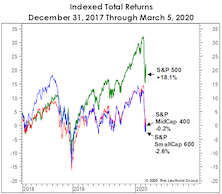 The underperformance of Mid and Small Caps in the last few years has taken valuations from top-decile readings (and, indeed, a few all-time records) just 25 months ago, down to the middle—and even lower reaches—of their 30-year valuation boundaries.

The coronavirus epidemic/pandemic is getting the bulk of the blame for the sudden collapse in U.S. equities, and certainly qualifies as one of the few “black swans” seen in modern market history. We do not think the ultimate path of the coronavirus contagion can be analyzed at this point, and medical experts foresee possible outcomes ranging from a serious epidemic to a short burst of illness that fades with the summer weather.

Nine months ago we established a “pilot” position of 4% in Emerging Market equities in the Leuthold Core Fund, based mostly on the bullish inflection in a long-term technical indicator (VLT Momentum).

In the spirit of good holiday cheer, we made a partial concession to the True Believers with a December “Chart of the Week” in which we narrowed our stock market valuation analysis to the historically elevated levels of last 30 years.

A Blast From The Past

With 2020 representing The Leuthold Group’s 40th year of publishing Perception For The Professional, we perused the first few Green Books for relevant nuggets from 1981, but the backdrop could not have been more different. Therefore, we instead turned the clock back 20 years, thinking it might yield insights more resonant with today’s environment.

A New Year, Or A Blast From The Past?

It was during the very first days of the great 2019 market rally that we noted its similarities to the bubbliest of all the bubble years—1999. Wow. We had it in our hands and frittered it away. 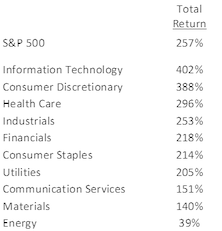 This “decade in review” edition examines the performance of sectors and industries, looking at the best and worst groups to reveal the stories they have to tell.

An occasional critique of our valuation work is that we consider “too much” market history to form a judgment as to what constitutes “high” or “low.” This type of feedback declined during and after the financial crisis (when historic valuation thresholds were temporarily revisited), but it has become more pointed as the U.S. market has soared to new highs.

Leuthold’s research team has recently flagged a number of items that suggest it may be time to consider small cap stocks. This asset class has been showing signs of life and the decision to overweight small caps is starting to seem relevant – and perhaps nicely profitable - again.

For valuation work, we’ve traditionally favored the 1,200 company Leuthold Small Cap universe over the S&P SmallCap 600 because we get almost a full additional decade of perspective. But figures for the latter shed extra light on just how significant the revaluation in Small Caps has been.

We intentionally curtailed our discussion of stock market valuations the last few months to allow the “dead horse” to recover from the thrashings administered in recent years. Now we’re rested, refreshed, and ready to deliver a few more lashes.

Commodity Stocks: “Low” But Not Cheap 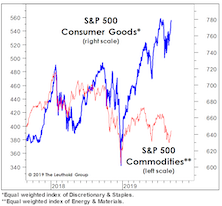 A general rule of thumb for thematic equity investors is that the dominant leadership sectors and groups in a given bull market normally don’t repeat as leaders in the subsequent bull.

Can Equity Investors Eat Their Cake And Have It Too?

Investor sentiment seems to be unusually conflicted these days. There are worries aplenty, including numerous political skirmishes of consequence around the world, a slowing global economy, and lofty U.S. equity valuations. On the other hand, fiscal stimulus is high for this stage in an economic cycle and the Fed is easing monetary policy, two policy drivers it rarely pays to bet against.

Commodity Stocks: More Of The Same 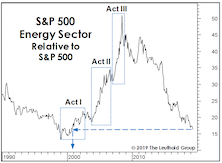 Someone forgot to tell commodity trades this is an era of diversity of inclusivity: This year’s leap in the S&P/Goldman Sachs Commodity Index has been entirely the result of its heavily-weighted energy inputs.

Adding EM On A Rent-To-Own Basis

The Major Trend Index has remained in neutral territory during the last several weeks of upside action, suggesting there remain significant fundamental and technical shortcomings beneath it all. But this precarious MTI stance didn’t preclude us from acting on a new bullish reading for Emerging Market equities at the end of April. 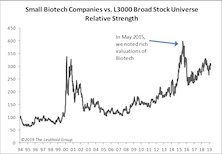 In May 2015, we warned about rich valuations for small cap Biotech stocks and looked at various ways to evaluate those companies, as the majority have no approved drugs on the market, thus no revenue; therefore, valuing these companies using the conventional methodology is problematic.

The “Breakout” And Its Aftermath

A common criticism of our long-term valuation work is that valuations shifted north into a new trading range during the 1990s, meaning Leuthold’s benchmarks (dating back to 1957 and earlier) are no longer relevant. 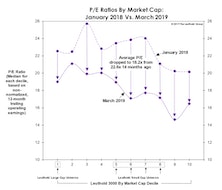 U.S. equity valuations remain considerably higher than those of any major foreign market, but there’s no denying they’ve improved from the cyclical peak made in January 2018. That’s true across the capitalization spectrum, and on the basis of both normalized and non-normalized fundamentals.

For a couple years, we’ve labeled the S&P 500 Price/Sales ratio as the scariest chart in the Leuthold database, and last year’s decline did little to improve its intimidating appearance.