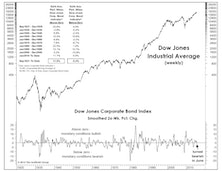 The smoothed, 26-week rate-of-change in the DJ Corporate Bond Index, a reliable indicator of monetary conditions over many different market and economic cycles, turned negative in mid-June.

Stocks And The Dismal Science 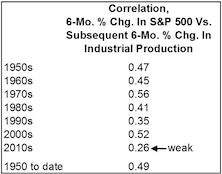 Worse Than It Looks… And Not Over 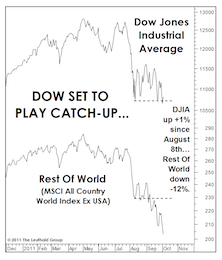 Most costly market decoy in the last six weeks has been unusual (relative) strength of the Dow and S&P 500 indexes. Resilience in blue chips is characteristic of the early and middle phases of a bear market, but recent blue chip performance has been so stellar (again, in a relative sense) that most investors curled up comfortably in the “correction” camp…while small caps, cyclicals and virtually all foreign markets were screaming “BEAR!”

Keep An Eye On The LEI – Leading Indicators Have Topped, But Have Yet To Roll Over

The Index of Leading Economic Indicators has a proven track record of indicating when a recession may be near. Although this index has been trending sideways for quite some time, it has not yet rolled over.

Yield curve typically inverted about 62% of the time.

Leuthold may have another favorite economist. Paul Krugman at Stanford was recently recognized as the best American economist under the age of forty.

A new nationally distributed newspaper has been born, USA Today. This big gamble might just pay off for Gannett. It is refreshing indeed to see a corporation make a big bet on a high-risk long-term investment, especially in this age of corporate timidity and financial mechanics. Also, Irving Kristol’s remarks at the Western Pension Conference.

The Art of Politics and Economics

Reagan’s change of economic course, leaving the hard-core supply-siders behind, was constructive, and from our standpoint, expected. Predictions for the next two years include significant social security reform, implementation of a somewhat watered down, but still very meaningful flat tax. Federal deficits in 1983 and 1984 will probably turn out to be less than now expected. And in November 1982, the Republicans will lose some seats, but the Old Cowboy will still be able to get his way with Congress when it is important.

Did you see Mike Blumenthal’s article, “What Ronald Reagan can learn from Jimmy Carter”? If not, read this brief synopsis. Advises RR to adjust economic program quickly and decisively to new conditions. Don’t hang tough, then retreat step by step. Changing course is not politically wrong.