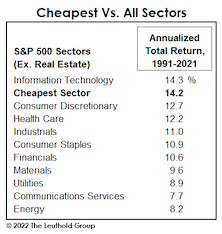 With the 2020 Bridesmaid Asset Class (Small Caps) and Bridesmaid Sector (Consumer Discretionary) underperforming in 2021, the Cheapest Sector results in 2021 salvaged a bit of pride for the author of this annual evaluation. Even better, owners of the Financials sector won’t need to send the government its share of their long-term capital gains, since they’ll be holding it for another twelve months.

A Good Year For Cheapskates

For our more fundamentally-oriented readers who are repulsed by all this talk of momentum, we have an alternative. Just forget about performance and focus solely on value! 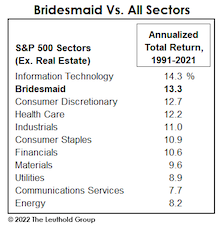 As noted, the Bridesmaid sector strategy has underperformed what has become a more difficult benchmark in five of the last six years. Those poor results have cut the annualized excess return of this approach to just +2.1% since 1991.

Once again, the idea is to dispense with macroeconomic trends, sector fundamentals, comparative valuations, and to base sector selection solely on the prior year’s total returns.

Financials has occupied the #1 overall ranking for all of 2021, thus far, but its absolute score has increased throughout the year due to well-rounded strength across the factor spectrum, reaching levels not seen in more than twenty years.

Financials have dramatically improved their Growth profile; a move that makes the traditionally value-oriented sector one of the most well-rounded segments of the equity market.

Impressive strength across the factor spectrum implies that the recent pop in the long-time beaten-down Financials sector should have more room to run. We highlight five attractively-rated Financials groups for investment ideas beyond the popular big-bank-concentrated Financial sector ETFs.

March 23rd marked the one-year anniversary of the COVID-19 bear-market bottom. We are all eager to turn the page on the pandemic ordeal and move forward to brighter days ahead. Looks like some big help is coming our way.

Investors looking for the long-awaited rebound in the Value style point to the potential for rising interest rates as a possible driver of style rotation. Higher rates would benefit many Financial companies, a sector closely linked to the Value style. In fact, many commentators believe that the Value style cannot experience a major run without the participation of Financials. We launched a research effort to examine the link between Financials and Value, seeking to understand whether there is truth in this old saw, or whether this connection is more properly classified as market folklore.

Investors looking for the long-awaited rebound in the Value style point to the potential for rising interest rates as a possible driver of style rotation. Higher rates would benefit many Financial companies—a sector closely linked to the Value style. In fact, numerous commentators believe that Value cannot experience a major run without the participation of Financials.

Financials was the “cheapest sector” in each of the last three years, and its significant underperformance versus the S&P 500 has shaved the historical “alpha” from this strategy. Still, those souls who’ve had the stomach to own the Low P/E sector each year have beaten the S&P 500 by 2.9% per annum since 1991.

Revenge Of The Nerds? 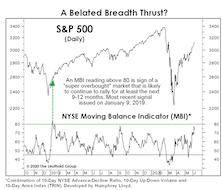 Last month we detailed two technical shortcomings of the rally off the March 23rd market low. The stock market duly noted our critique and has issued its response.

Where Are The Leaders We Need?

Small Caps lagged during the bounce off the March lows before a late-April spurt briefly pulled them ahead of the S&P 500. Still, considering that Russell 2000 losses were so much steeper than the S&P 500’s (-43% versus -33%), we would have expected something better.

The “robustness” of the “Cheapest Sector Strategy” concept is illustrated by strong results across all rebalancing frequencies.

For Value Investors Only!

With the possible diminution of “alpha” in price momentum strategies, we recommend that sector allocators consider approaches that are more countertrend or contrarian in nature. 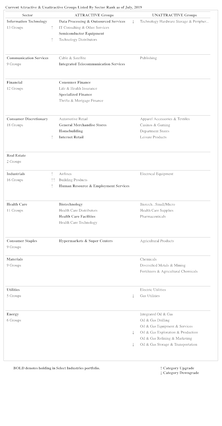 The top-three-rated sectors are Communication Services, Information Technology, and Financials. As recently as March, Financials ranked in 9th place out of 11 sectors; it has now placed among the top four since May. Real Estate dropped out of the top three after a two-month visit and is situated in 5th place this round. For the fifth consecutive month, the three lowest-ranked sectors are Utilities, Materials, and Energy. 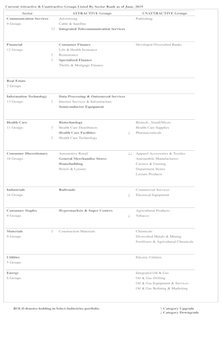 The top-three-rated sectors are Communication Services, Financials, and Real Estate.

The Financials’ Group Selection (GS) Score sector-composite rating has incrementally improved over the past five months, rising to rank #2 out of 11 sectors in late June. 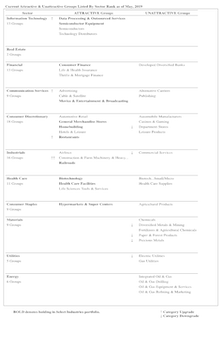 The top-three-rated sectors are Information Technology, Real Estate, and Financials.

Signs Of Spring For Financials

Signs of spring are popping up everywhere in the Financials sector. S&P Financials was easily the top- performing sector in April and several sub-industries have been bubbling higher in our Group Selection discipline.

Industry trends and the investment merits of companies involved in the asset management business; we contrast ETF providers with firms involved in traditional active management.

Our Financials Sector Ranking has been strengthening since August—well before the Trump Bump. The addition of Regional Banks to our SI Portfolio boosts our Financials exposure to an overweight 26% versus the S&P 500’s 15% weight. Reinsurance and Developed Diversified Banks are also among the Attractively-rated options for diversification within the sector.

Forces specifically driving many Financials groups include expectations for an ongoing yield rally and a steepening yield curve, tax cuts, and loosening financial regulation. While these outcomes remain largely speculation, the odds have improved and any of these developments would be a welcome change.

The S&P 500 Financials’ four-day, 11% rally has carried the sector to a new bull market high and the best closing level since May 6, 2008. The new high eliminates one of the long-term negative divergences from the Red Flag Indicator discussed periodically in the Green Book. Another longtime “Red Flag,” the Dow Jones 65 Composite, closed yesterday only fractionally below its December 29, 2014, all-time high. This is good action. 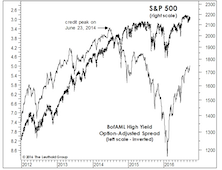 So long as one maintains a “nationalistic” perspective, Financial sector indicators support a bullish view toward both the economy and stock market.

Commentators now label this cyclical advance the “seven-year bull market,” but that won’t be semantically true until the S&P 500 closes above its May 2015 peak of 2130.82.

We like to think our models and indicators help us preserve a high degree of market objectivity. But sometimes we wonder: the latest rally has progressed to the point where we see trouble afoot in both the strongest and weakest charts we can find.

Among the bottom ranked sectors are Utilities, Materials, Energy, and Telecom Services. These four sectors have been the bottom four rated sectors for a minimum of eight months.

We recognize that—regardless of their empirical appeal—momentum-oriented approaches aren’t suitable for every investor. For those investors, we’ve identified an alternative sector allocation strategy that’s delivered long-term results almost identical to those of the Bridesmaid approach, but which is based on a single, simple selection criterion that should appeal to the most hard-wired contrarian: The Low P/E.

Charts That Challenge Us… 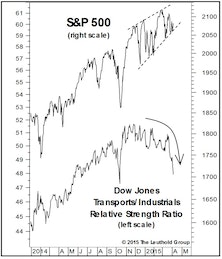 While our disciplines continue to turn up enough bullish evidence to keep us cautiously positive toward stocks, we are seeing troubling signs by cyclicals (especially the Transports) and junk bonds.

New Laggards On The Radar Screen 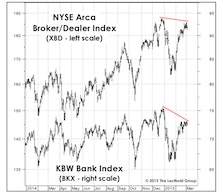 Transports now find themselves in a three-month RS downtrend; it’s too early to tell if this is an important message. Leading up to 14 of the last 16 bull market tops, Transports underperformed for a six to 12-month period prior to the final bull market high. 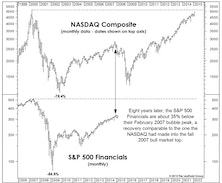 We wouldn't be surprised if the S&P 500 Financials require a recovery period just as long as NASDAQ's.

On October 20th, Apple Pay was officially launched in the U.S. with great fanfare. Since the launch, we’ve heard a lot of buzz words such as “disruptive,” and “transformation,” and then “million users signed up within the first three days.” Amid this enthusiasm came the bad news that some retailers, including Rite Aid and CVS, disabled Apple Pay at their POS’ and reports broke that a retailer consortium was developing a rival payment system.

Profit Margins At The Sector Level 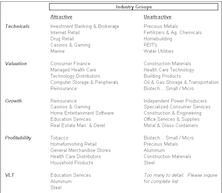 2013 Factor Performance: What Worked? What Will Keep Working? 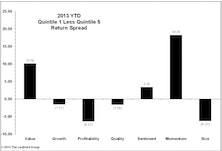 Momentum and Value worked in 2013. Materials and Financials were the easiest sectors to exploit; Discretionary and Tech the most difficult. Momentum works in December; Value and Small Caps at the start of the year. 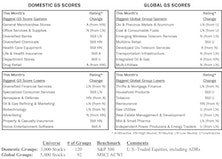 Playing The Bounce - With A Twist

The historical batting average of this strategy has been decent, with gains in 9 of 18 years along with “excess” returns over the S&P 500 in 10 of 18 years. The best Bounce seasons have occurred when the market was either down for the year through September, or up only modestly.