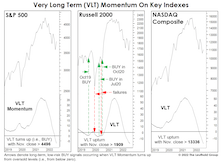 “Oversold” usually has a positive connotation in financial jargon, yet history’s worst air-pockets have almost always occurred when the stock market was deeply oversold. More time is needed before a “low-risk” entry point for the S&P 500 will be triggered from the VLT’s currently “oversold” status.

Your “Free Lunch” Comes With A Tab

The market impact from money printing has been underwhelming when adjusted for the inflation it’s unleashed. Measured from the peaks associated with the first attempt at Quantitative Tightening, in inflation-adjusted terms, Small Caps, EAFE, and Emerging Markets all have losses.

Digging Out Of The Red 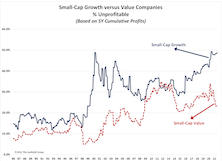 An unprecedented number of companies are still deep in the red, even while the economy is shrugging off the impact of the pandemic. Small-cap growth companies are showing no sign of a quick recovery.

After The SPAC: De-SPAC Performance

The ultimate measure of a SPAC sponsor’s success is stock performance post merger: De-SPAC results. We analyze historical returns of De-SPACs that had initial market caps greater than $200 million.

A COVID Weight-Loss Program For The 4% Club

While we’re still squeezing into our pants and fretting over our newest chin, the S&P 500’s three-largest firms have been shedding their COVID-weight gain at a measured pace for months. Whereas most people drop the pounds through vigorous activity, these firms have managed to slim down just by standing still. 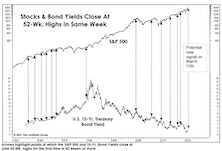 How It Bodes For Biden 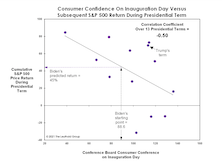 Early evidence suggests the Biden administration and the newly “purple” Senate will resist the pull of the far-left, at least from an economic perspective. Stock investors are cheering... though in light of their current euphoria, they might as well have celebrated a write-in victory for Ralph Nader alongside Green Party control of the Senate.

With last year’s Bridesmaid (REITs) having laid an egg, the long-term “alpha” of the Bridesmaid portfolio narrowed to +3.7% from a bit over +5% (annualized) when we first published this study more than a decade ago.

In April 2018, armed with a large number of ETFs and long-enough historical data, we applied our back-testing methodology for individual stocks to the universe of ETFs to determine if the same (or some) of those components could useful for assessing ETF performance prospects. One of the factors we reviewed was fund flow (adjusted by AUM), which revealed that those ETFs experiencing the largest asset inflows proceeded to significantly underperform.

SPACs: More Analysis Of Past Deals

Last month, we briefly discussed a burgeoning investment vehicle—Special Purpose Acquisition Companies (SPACs), also known as “blank-check companies.” Since the sole purpose of a blank-check company is to find an operating business to merge with, and subsequently bring it public, the best method to gain some understanding about the outcome of these relationships is to look at past deals.

We’re concerned that cyclical groups, which normally catch fire after a breadth thrust, are tracking along the bottom (or below) the previous worst-case outcomes following identical breadth-thrust signals.

Should You Trust The Thrust?

There are two concerns with the latest bullish thrust signal, with one, in part, causing the other. First, the S&P 500 return preceding the MBI thrust signal was +42.8%, almost triple the average slippage of +15% associated with all prior signals.

The Active Goose, The Passive Gander

Raise your hand if you’ve heard this one before:

(A)  80% of active funds underperformed their index over the past 10 years.

Now, keep your hand up if you have also heard this:

We review the somewhat out-of-character performance of the Utilities sector to try to pinpoint what is influencing results. This article touches on several potential drivers for the sector’s relative strength.

Our recent commentary “1” For The Record Books noted that just one of seven S&P smart beta factors was able to outperform the S&P 500 last year, even though each style basket limits its holdings to constituents of the parent index.

The Easy Fed and the “Other” Inequality 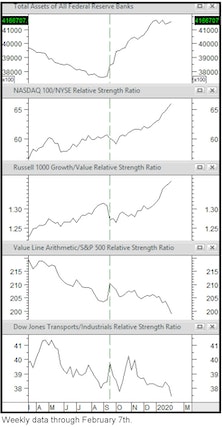 Super-easy monetary policy has been blamed for the rise in income and wealth inequality in recent years, and more recently we’d fault the Fed for performance inequality within the stock market.

Despite a historic economic expansion during the past decade, there is an ever-increasing number of companies that are finding profitability has become harder to achieve.

The market difficulties of 2018 were hardly limited to stocks. Commodities, in fact, were the worst performer among the seven major asset classes.

3% Yields Proved To Be High Enough

In September the popular claim was that “interest rates were rising for the right reasons,” and still too low to threaten stocks or U.S. economic expansion.

Narrow Performance Divergence Among EM May Not Last

This article summarizes our current research into the interaction between factors and sectors. We find that sector weights have a significant influence on some factor results, while the true factor impact is the key driver for others. Watch for our full report coming next week.

The setback that began in late January qualifies as the sixth intermediate correction of the current bull market, where “intermediate” is defined as an S&P 500 loss ranging between 7%-12%... 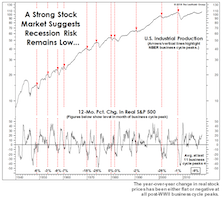 In the last couple of months, we’ve come across a handful of economic “check lists” purporting to show the relative absence of recession harbingers as the expansion closes in on its ninth anniversary this summer. 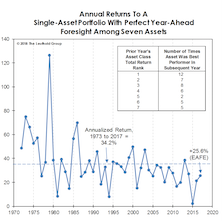 Here’s another way to look at the persistence of momentum across asset classes for the last 45 years.

A Study On Closed End Funds

In March 1991, an article titled “Investor Sentiment and the Closed-End Fund Puzzle” was published in The Journal of Finance.

The Intelligent Use Of Smart Beta 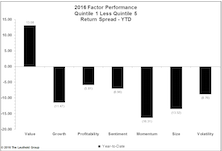 Factor performance during 2016 is the reverse of that of 2014-2015. Quants and smart beta funds focusing solely on Value have enjoyed the year, while multi-factor approaches have struggled. Value has been the only factor that has provided positive performance this year.

Not Much “Lift” From VLT “BUY”

In the June Green Book, we professed some skepticism surrounding the long-term, “low-risk” BUY signal for stocks that was triggered at the end of May by our Very Long Term (VLT) Momentum algorithm (also known as the Coppock Curve).

Validating results of a prior study, a look at the last four MSCI index rebalances shows that stocks soon to be added outperform from Announce Date to Effective Date, while deleted stocks underperform.

The Fed’s Capitulation To The Dovish Side— A Win-Win For EM & U.S.

Asset Allocation: No Upside In 2015

Hedge funds have shuttered by the dozen in the past few weeks, with the worst carnage among those focused on Emerging Markets and commodities. But the problem is broader.

The Pause That “Depresses”? 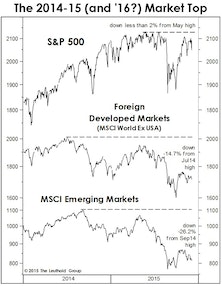 The blue chip U.S. indexes have gone nowhere in 2015, and we expect bulls will soon write off the year as the “pause that refreshes.” But what’s been refreshed? 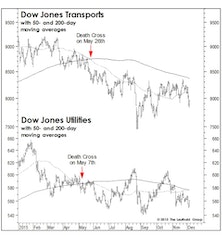 While the S&P 500 had erased all but 2% of its August loss as of early December, Small Caps and the “average stock” had recouped only about half their correction losses. Not good.

Quantitative Factor Performance: What Is Working? 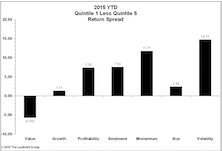 For the third consecutive year (thus far), quantitative factors worked best within the Materials sector. Energy also saw success as the decline in oil hurt the same stocks as in 2014. Factors were least effective in Health Care and Telecom.

A strong dollar and low commodity prices are major forces dragging down EM currencies across the board.

Recession? Too Early To Call 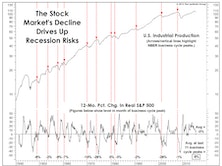 Among the various arguments put forward by those believing the recent decline is no more than a correction, the most difficult for us to address is the common claim that “there’s no recession on the horizon.”

Last year was a solid one for the Group Selection (GS) Score approach, with the Attractive list delivering a total return of +13.1%—more than 500 basis points above The Leuthold Group Universe average, which gained only +7.9%. 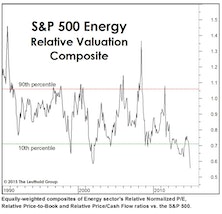 The recent Energy sector decline has accomplished the feat of wiping out all of the upside gains achieved during its “Third Act” played out in the 2006-2008 surge.